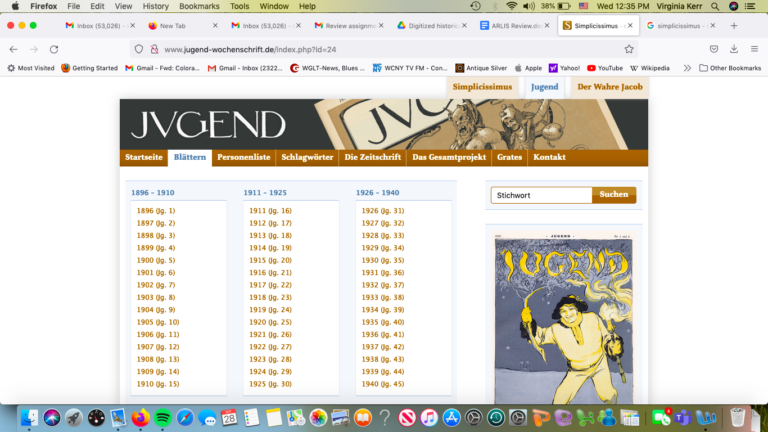 According to those responsible for this collection, the goal of this digitization project was to “make the most important political satire magazines of the last century available in full.” With backing from the Deutsche Forschungsgemeinschaft (DFG), they did so in 2014, resulting in the site under review. It offers a full run of the German satire magazine Simplicissimus from its founding in 1896 to its closure in 1944, as well as digital runs of two other important publications: Jugend (1896-1940) and Der Wahre Jacob (1884-1933). In lieu of accessing physical copies, rare outside of Germany, there is no better means of interacting with these primary sources that reflect critical eras in Germany’s eventful twentieth-century history.As a scholarly resource, the site is exceptional; as a model for digitizing serial publications, it is exemplary.

Academic libraries and archival repositories have joined many museums in making high resolution digital surrogates of their unique collections available for research. Responsibility for this site belongs to the Klassik Stiftung Weimar (KSW), connected to the Herzogin Anna Amelia Bibliothek in Weimar, in collaboration with the Deutsches Literaturarchiv Marbach and faculty at the Rheinisch-Westfälischen Technischen Hochschule Aachen, who oversaw the digitization of Simplicissimus. The Jugend and Der Wahre Jacob collections, on the other hand, come from the Universitätsbibliothek Heidelberg (UBH), who concurrently held a grant from the DFG to digitize their own holdings of German and foreign satire magazines, and at some point became a further contributor to the project. One can find a broader array of publications via a UBH site, but the interface is clunkier and requires a considerable amount of scrolling and clicking to get to individual issues.

A peculiarity of the KSW site is that there is no central homepage for the three digitized periodical titles; instead each has a separate start page (Startseite) accessed from tabs at the top of the site. Each start page applies the same interface design and accesses shared features. The pages provide an intuitive browsing structure, as well as contextual essays and linked databases that aid navigation, whether one is browsing for pleasure or researching a specific topic. Locating and examining individual issues of Simplicissimus, Jugend, and Der Wahre Jakob on the KSW’s site is a breeze.

From the “Issues” (Blättern) page of each start page one is given a chronological list by volume. From there it is just a matter of choosing an issue number, listed alongside its publication date, with a thumbnail image of the front cover. Pages are scanned in color, ideal for documenting these examples of early commercial color printing; the image resolution online is adequate for reading and study, and a “lupe” is provided to magnify page details. Full issues can be viewed online or freely downloaded as PDFs, albeit in lower image resolution. The site does not offer OCR for the digitized titles.

Supplemental pages provide further tools for access as well as context. Of special note are the linked databases. One (Personenliste) indexes every contributor (writers, illustrators, and caricaturists) in the three magazines and links to issues their work appears in; the other (Schlagwörter) lists  thematic terms, places, or historical people referenced in the magazines, with identifying  biographical/historical information culled from Wikipedia and the catalog of the Deutsche Nationalbibliothek. A search field on the homepage accesses both lists, but search results are inconsistent and do not compile data from all three publications. Contextual pages outline the history of the publications (Zeitschrift), contain a thorough bibliography (Literatur), and introduce the project (Gesamtprojekt) and its various contributors (Grates; Kontakt).

According to the team, the site was mainly constructed with open-source components (e.g., MySQL, PHP, Typo3). If upgrades could be implemented, the ability to compare two issues at a time or generate virtual collections would greatly improve usability. As currently configured, the site remains nevertheless a boon for scholars of German print culture and political thought.

Type to search or hit ESC to close
See all results
This site is part of the ARLISNA network on Humanities Commons. Explore other sites on this network or register to build your own.
Terms of ServicePrivacy PolicyGuidelines for Participation